Here is our simple playset for Adam and Eve.  I was quite inspired by Our Country Road‘s Adam and Eve story telling box, but made ours very simple and used Duplo to create the two trees in the middle of the garden. I didn’t even find the time to paint Adam and Eve, but that didn’t seem to bother the kids.

First, Adam named all the animals in the garden of Eden. 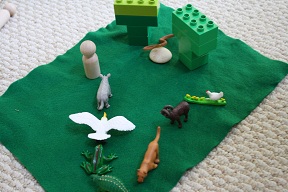 Then God decided that Adam needs a helper and put Adam to sleep. 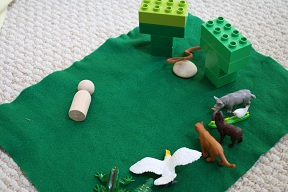 J-jo wanted him to have a blanket for his nap. 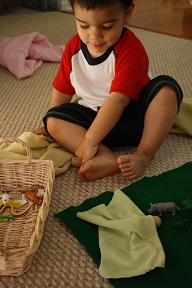 Now they were Adam-Eve (that’s how it is related in the Godly Play script).  In the middle of the garden were two trees.  The tree of good and evil (differences) and the tree of life.  God told them not to eat from  the tree of differences. 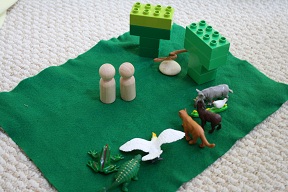 But the serpent suggested to Adam-Eve that they taste the fruit from the tree of differences. 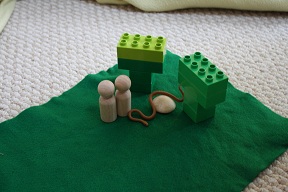 And they did and things fell apart for them.  They became Adam and Eve.  The difference between them and God came apart.  God called them and they hid (the script just says to cover them with your hands) but God found them. 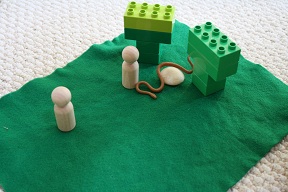 The script involves little pieces of paper with the differences written on them and though I used them for the presentation, we didn’t use them when retelling the story in days that followed. 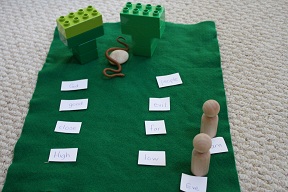