Part of a Classical Conversations class is 30 minutes of review.  Review is usually done through “games”.  There are great lists of ideas on CC Connected, the forum for CC parents and tutors.

At home, we review the good-old-fashioned way – boring as it may be.  I simply read the question side of the CC flashcards and Bear tells me the response.  For maps, she simply points out all the places she is to have memorized.  Thursdays we do the lapbook.  In class, though, we try to make it more “fun”.

Here are five of the games I use or have used in class with the 4s and 5s:

1) Catch – I have a beach ball with the subjects written on it and the kids pass the ball to one another.  Each time they catch the ball, they get a question for the subject their hand is near or touching.  My kids usually all tell me the answer, though with older kids you could play it more competitively.

2) Rockets – This is a game I got off CC Connected.  My class loves it.  I ask a question, the class answers it, they each roll a die and color in the number they rolled.  The first to color in all 6 numbers “wins”. 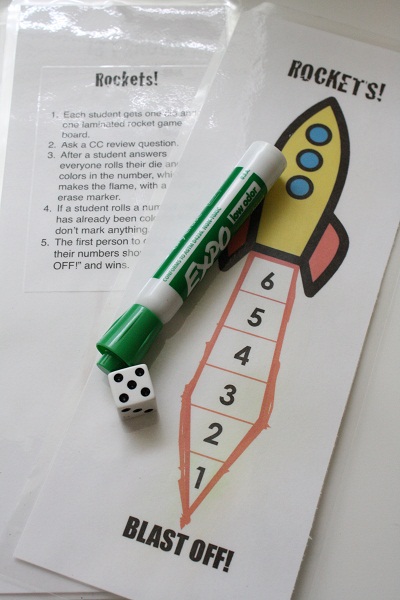 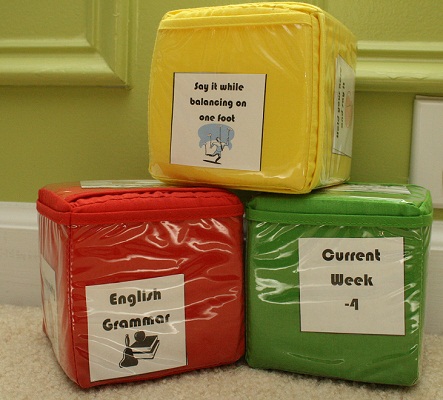 4) Conductor in the middle – when I had the 4s last year, they never knew their memory work 😛 so we would play this version of musical chairs to listen to the music of the memory work.  I was also using a lot more songs for that cycle so it worked well.   The person who remains standing gets to stand in the middle of the chairs and conduct the music.

5) Duck, duck, goose – this works well for Latin or English grammar, or anything list like, really.  The kids make a circle and the “goose” taps around the circle saying the memory work.  So for Latin Cycle 1 Week 3, she would say, “a, ae, ae, am ,a, ae, arum, is, as, is and the child tapped on that last is would be the one to stand up and run around the circle in the opposite direction.  The kids do tend to get a little wild with this one and the tapping on the heads gets too hard.  I’ve avoided it this year, though it would work well as a game to introduce the Latin, instead of just sitting there chanting it.