We love Goodnight Moon and have read it numerous times since Bear was born.  Still, both children loved all the activities and discussions this week as we followed the BFIAR guide (I’ll be reviewing this guide for TOS September 14th)  One special thing I am trying to do with the BFIAR books is find them in French or Spanish and do all the reading in those languages.  So this week, we read Bonsoir Lune and the companion book Buenas Noches Luna 1,2,3. 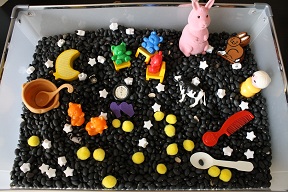 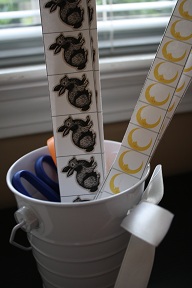 Cutting strips – made in a Word document.
Leave a comment if you would like me to email them to you. 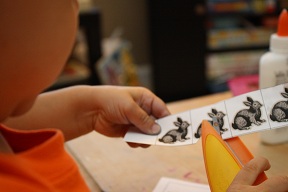 J-jo has shown lots of interest in cutting in the last two weeks, but only if there are pictures on the strips. 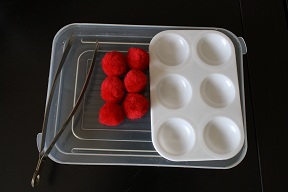 Red “balloons” with tongs (I also added one of these red “balloons” to the sensory bin after I took the photo above). 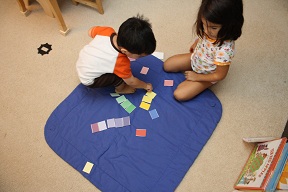 Goodnight Moon shows the room getting darker and the outside getting lighter, so it was a great time to do a presentation of the third color box (or our version of it).  I was so surprised when Bear chose it again later on in the week.  I’ve been trying to interest her in this since she was two and a half and this has been the only time she goes to choose it herself, and more than once.  Sensitive period hit? 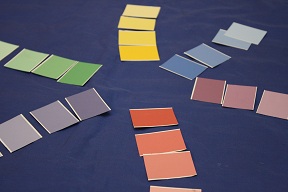 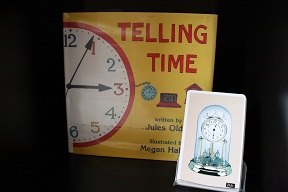 I put some telling time flashcards (Target dollar section – I only put out the hour and half hour cards). 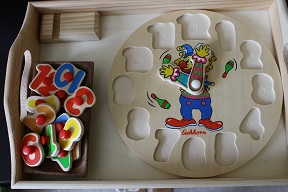 J-jo did his clock work though.  He just had to complete this clock puzzle. 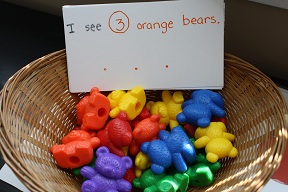 Left over from Blueberries for Sal last week, but ties in to Goldilocks and the Three Bears, which is present in Goodnight Moon. 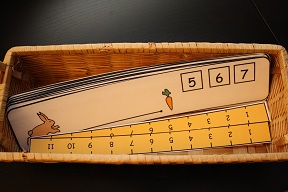 Measuring from Making Learning Fun.  Bear had to clip a clothespin to the right answer and check the back to see if her clip lined up to the dot I had placed there. 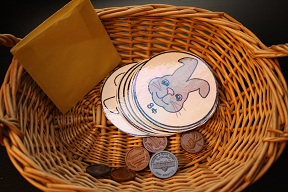 Bunny themed shopping game.  We lay out the bunny cards and she has to make purchasing choices based on the coins in the basket.    It’s also from Making Learning Fun. 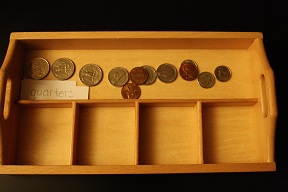 Lots of reading of books about rabbits, the moon, and nocturnal creatures. 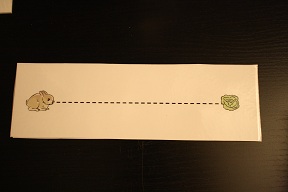 Rabbit tracer cards from Jolanthe’s The Runaway Bunny pack for J-jo (2).  I was surprised when he traced the line really well (not photographed). 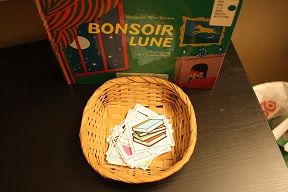 I also made French three-part cards for the words in the story.  If anyone teaching French needs them, just leave a comment with your email.

We have been ballooned out from all the August birthdays, so we will visit a pet store and hopefully see some bunnies instead of doing a red balloon. We also went out in the middle of the night to try to see the moon. We will row The Little Rabbit and The Runaway Bunny (in French) next.

Go visit Delightful Learning’s row of it too.  She has a great mitten hanging activity that I wish I had remembered to do! If it weren’t for all of Michelle’s BFIAR posts, I don’t think I ever would have even known about Five in a Row.  Thanks, Michelle!

Linked to Tot School at 1+1+1=1; Preschool Corner at Homeschool Creations; Mom 2 lil Posh Divas; Beneath the Rowan Tree and the Weekly Wrap-up at Weird Unsocialized Homeschoolers.