Rowing these books together is working nicely for us.  We did  Bear Hunt in English last week and are doing it in French this week.  We are also reading Blueberries for Sal each day.  I was going to move on next week, but Jolanthe from Homeschool Creations has just made some of her BFIAR printables available and both We’re Going on a Bear Hunt and Blueberries for Sal are done, so we may just continue these books for part of next week. 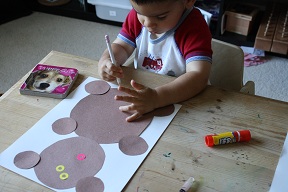 We made circle bears.  Bear did everything herself.  I did everything but glue J-jo’s.  Well, he also put the eyes and nose on himself.  I love that after I wrote his name on his, he started saying the letter sounds and pretend writing it too.  That was a first.  He hasn’t shown much interest in letters.  Numbers are more his thing. 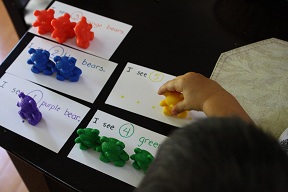 I made some impromptu counting color cards to use with the counting bears.
Practical Life: 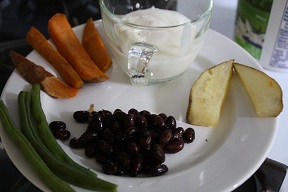 We scoured our pantry to see what we could use to make a Going on a Bear Hunt lunch.
Green beans: grass
Glass of water: river
Black beans: mud
(chocolate pudding or refried beans would have been a more accurate texture)
Sweet Potato Fries: forest
Yogurt: snowstorm
Potato wedges put together to look like the entrance to a cave.
The kids thought it was great. 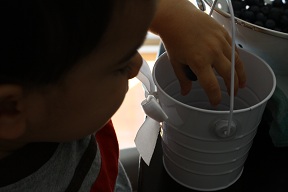 We missed blueberry season by two weeks.  The season ended more quickly this year because of the lack of rain and the intense heat. I bought blueberries at the supermarket and the kids dropped them into their tin pails before eating. 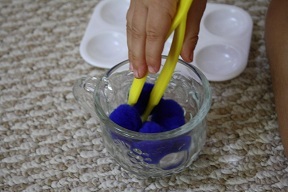 Tweezing blueberry pompoms into a little paint tray.
Art:
By far, this was the most fun part of the week.  We made a long banner of the sequence of We’re Going on a Bear Hunt. 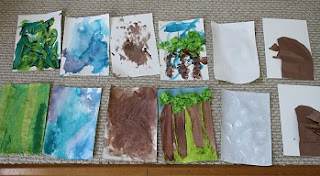 Top row is J-jo’s work; bottom row is Bear’s.
Grass: blue and yellow tempera paint squirted directly on the paper and mixed to green with the paintbrush.  Green and yellow tissue paper torn into strips pushed into the paint before it dried.
River: blue and red watercolor paint on wet paper.  Plastic wrap was bunched up on the wet paint, leaving a really neat effect. 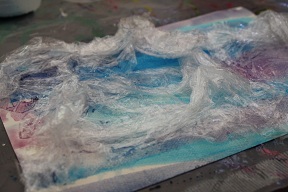 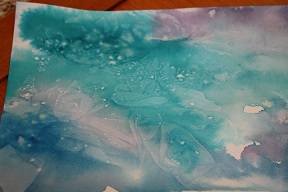 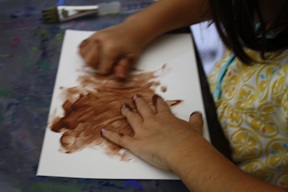 Forest: J-jo used toilet paper mixed with glue to add texture to his trees.  Bear just painted hers.  Both used green tissue paper scrunched up to make the leaves and painted the sky blue.
Snowstorm: rolled grey onto the paper and then blotched white paint on top for snowflakes.
Cave: I cut the caves out of brown construction paper, scrunched them and then we glued the edges down, leaving it so the bear can go in and out.  Bear drew her own bear (below) while I drew J-jo’s. 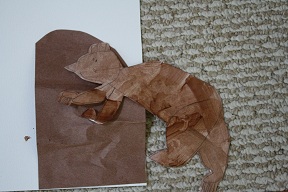 Once they dried, I taped them all together to make an accordion.  They are sitting on the top of our school shelves.
Linked to Tot School at 1+1+1=1; Preschool Corner at Homeschool Creations; Mom 2 lil Posh Divas; Beneath the Rowan Tree and the Weekly Wrap-up at Weird Unsocialized Homeschoolers.
24 months 4 years art bears books FIAR montessori school corner tot school